5 Reasons why Moulin Rouge is Postmodern 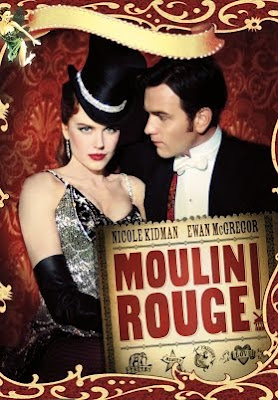 Pastiche - The film is basically a mash - up of various love songs. Its known to be the "Romantic Pastiche Jukebox." Featuring songs such as Your Song, One day i'll fly away, Lady Marmalade and the list goes on!

Appropriation - the film takes various songs and gives them a new meaning to tell its own story. For example they use "The Sound of Music" in the musical that the characters are creating called "Spectacular, Spectacular."

Magic Realism - Although parts of the film involve realism it does have some hyper - real and fantastical moments. For example the singing moon or green fairy. The film also uses music that was written about 70 years after the time period the film is actually set in.

Intertextuality - the film conveys popular culture by playing pop music from artists such as David Bowie and Madonna. The elephant scene between the two lovers involves a medley of popular love songs. The film is also a story within a story and musical within a musical. Both having the same narrative.

Parody - The film has a lot of comedic moments that imitate the musical genre. There is a "playfulness" and melodramatic quality through out the entirety of the film.